Ethan and the Diorama

I have had the Blogging Blahs lately...or maybe it is just that so much has been going on that it is simply so overwhelming to sit down and write about it after trying to organize my days around it! But since I had some free time today, I wanted to show you a project that Ethan worked on last week for school.

This is the first school project that Ethan has done for school like this and I really did not quite know what to expect. I actually did not even know he had a project due...it was only because he told me that he had no homework, which I found mildly suspicious, so I went through his bookbag. I noticed that his homework folder was falling apart, so I decided to get rid of all the old papers and get him a new folder. I noticed one paper that described an animal project and started to question Ethan about it. Of course, most of the information was not in his folder and he seemed to not be able to tell me what I wanted to know. I emailed his teacher and found it that the project was due on Friday (this was on Monday) and that Ethan wanted to do a diorama of a squid. Other kids were doing power point presentations, some were just doing posters, they just had to do something.

When I talked to Ethan, he seemed to have it all planned out in his head, but had absolutely no idea how to carry it out. So, I helped him find a shoebox...but he could not figure out what to do with the background. He knew he wanted a squid and a submarine, but didn't know how to make a submarine. I found online how to make a submarine with toilet paper rolls, so he did that...with plastic egg halfs glued on each end. The two pieces were taped together and then spray painted. 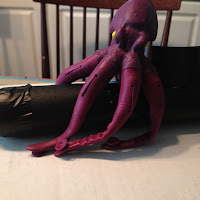 The next day, the Hubs and I ran over to Hobby Lobby to find some spray paint or something that would be appropriate for the background of the bottom of the sea. Low and behold, there is a whole section there dedicated to diorama's!! Who knew that you could actually buy everything you needed, from the box you put it in, down to the little forest trees! Things have come a long way since I was in school!! All we picked up was some spray paint and a plaster kit to make pretend rocks.

When Ethan came home, we made the little plaster rocks...which was a very simple kit, by the way. It came in it's on little kit to mix...no mess, no fuss, it even has it's own little stirrer. After it dried, there were paints that came with the kit and Ethan and Jonah went to town painting the rocks a multitude of "ocean-type" colors. 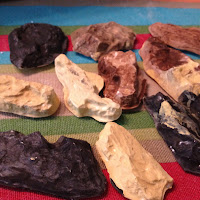 The next day, while the kids were at school, the Hubs spray painted the inside of the box...making it look like the depths of the ocean, along with the rocky bottom. When Ethan got home, they started to assemble the box: gluing the rocks on the bottom; attaching the submarine to the box with a stick; and delicately placing his squid on top of the submarine. The last touch Ethan wanted to add was a red star on the submarine. Details, I guess! 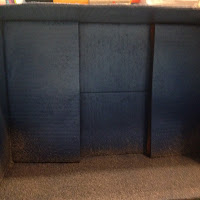 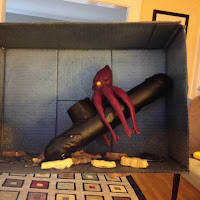 He was very nervous taking it to school the next morning. Worried that something was going to fall off was top of his concerns. After talking him through problem solving steps, he seemed more confident and he was on his way. When he got home, he said that as soon as he got in the van of the mom we carpool with the squid fell off and a rock fell off when he got to school...but at least he didn't panic and just went with it. He seemed pleased with it and happy at his classmates response. 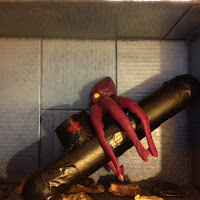 You can read all you want about other children or teens experiences in school doing projects while having autism, or specifically, asperger's...but until you have experienced it first hand, you do not know how it will affect your own child. It seems obvious now that Ethan seems to have clear ideas in his head about what he wants to do or what he wants to happen. But taking the initiative or getting it done without help will be an issue. We found out Friday afternoon that along with the diorama, he was also supposed to write up facts about the animal he was presenting...but because he never brought home all the paperwork, we never knew that. Luckily, his IEP allows for modified work and I have a good relationship with his teacher so I am sure she will not count him off for that. Plus, Ethan knows all the facts about a squid, he just did not have them written down. It is just another one of those learning moments when you have a child with a special need.
Posted by Unknown at 5:15 PM

Vote for Me Daily on Picket Fence Blogs

Our Journey Thru Autism

Moms Do It Better