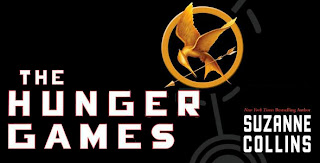 Over the weekend, I took Lindsey and a friend to see The Hunger Games. I have never read any of the books by Suzanne Collins, was not really aware of the trilogy, and quite oblivious to the anticipating fans towards the opening of this movie. Boy, I totally underestimated the fan base of this group of fans!

On Friday night, Lindsey's friend texted her and said that she was out with her parents and wanted to take her to the movie on Saturday, could she go, and which movie time she wanted. I, of course, would be taking them. (Secretly, I wanted to see the movie, so it did not really bother me!) Good thing we got tickets the day before, because out of six screens, one being an IMAX screen, they were sold out. Plus, our movie theater was packed and we had to sit on the front row! UGH!!!

Now, since I had not read the book, I did not know what to expect. Lindsey borrowed the book on her Kindle the night before and stayed up all night, I think, reading it. She said it might be violent, but it was PG-13, so you never know what that means. But I knew as she was finishing the story before we left, she told me she was trying not to cry so I figured that there must be something mushy or sad so I did grab some extra napkins at the snack counter!

I'm not going to tell you the whole story because you can find that anywhere. I will say that I really liked the story. As far as the violence, I did not think it was that bad...of course,  I was sitting on the front row with my neck at an awkward angle and had to continually scan the screen from left to right to take it all in. So if there was a running scene where someone was chasing, or fighting, I could not really see everything until is was all over. But seriously, my boys have video games more violent than what was in this movie. There were no curse words, which I think is almost worse. Once of the things I liked the most, was the fact that the main character, Catniss (weird name, right?) volunteered herself to save her sister. How many brothers or sisters would be willing to do that. We would hope as parents that our children would do that for their siblings, but would they?

So, I come home and start looking up Hunger Games goodies...

Source: polyvore.com via Meredith on Pinterest
Posted by Unknown at 9:22 PM

Vote for Me Daily on Picket Fence Blogs

Our Journey Thru Autism

Moms Do It Better